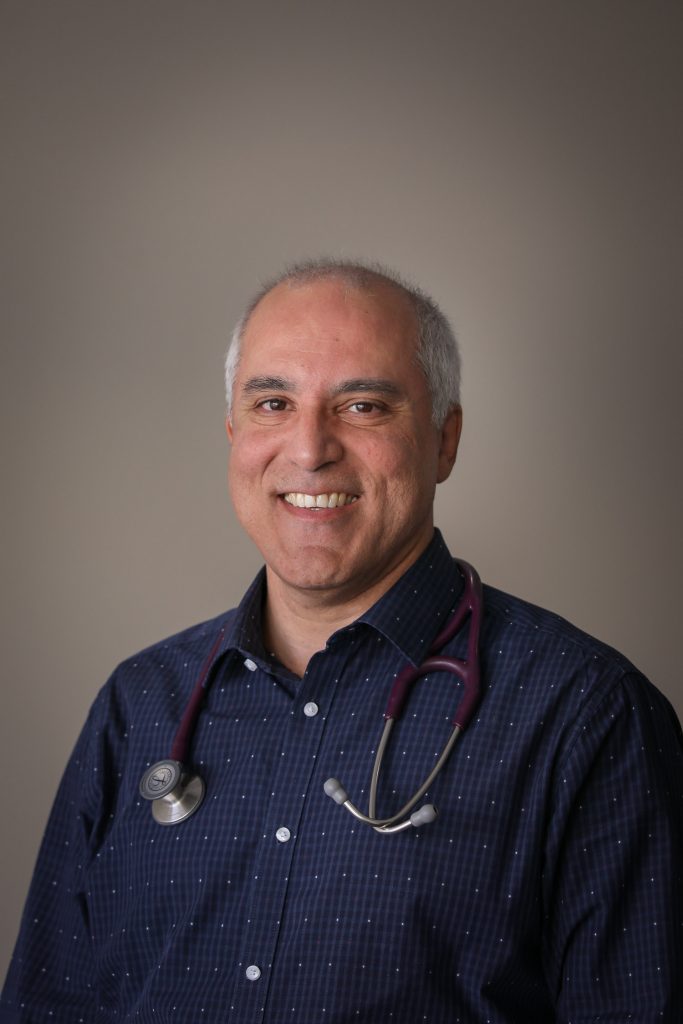 Dr Mehdi Sanati completed his medical studies in 1999 and was qualifed as an anatomical pathologist in 2004. He worked in Dandenong Hospital, Sunshine Hospital and Mildura Base Hospital before starting GP training in 2008. He completed his GP qualification in 2011, when he was awarded GP registrar of the year, and has been working in Mildura since then.

In 2014 he was awarded the Australian Medical Association (AMA) Excellence in Healthcare Award.

And in 2017, Dr Mehdi was awarded the Fellowship of Advanced Rural General Practice (FARGP), was named Victorian GP of the year and received an OAM for services to medicine as a general practitioner.

Dr Mehdi is also a GP supervisor and trains junior doctors in the area. 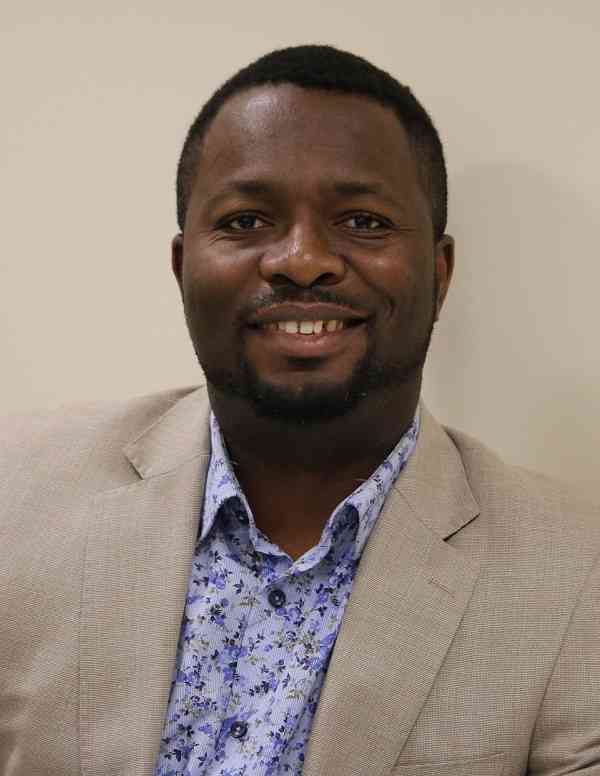 Dr Kelechi graduated in 2005 from the University of Nigeria. He is a qualified General Practitioner with an interest in mental health, paediatrics and minor surgical procedures. Dr Kelechi is fluent in English and also Ibo and Hausa. 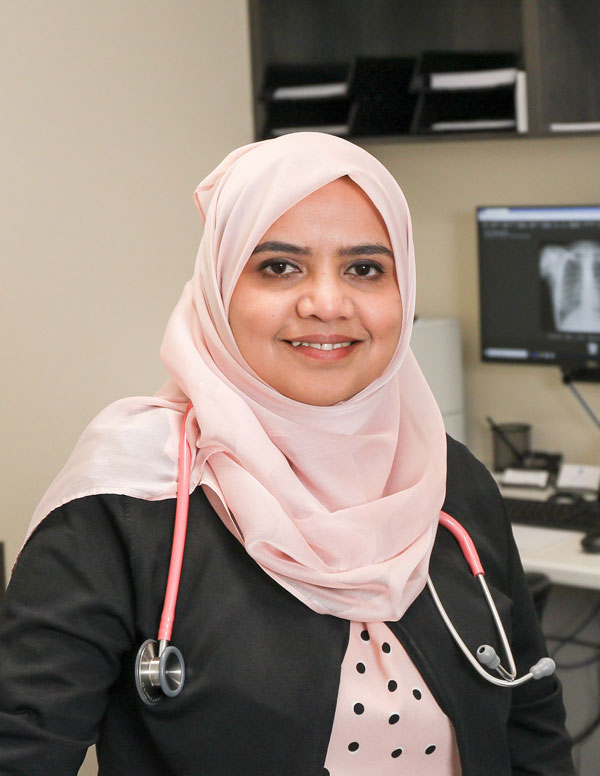 Dr Afshan is originally Indian background and she speaks fluent Hindi and Urdu. She has completed her medicine education in Bangalore, South India. She has graduated from Karnataka University in 2007. She has been living in Australia since then , she has got 2 kids. She has been working as a GP in Mildura last 6 years. She is also working in Mildura Base Hospital in Obstetrics and Gynaecology. She doing a Diploma in Women and Children’s health since it is her interest. She likes the country living and contributes to the community in many ways. 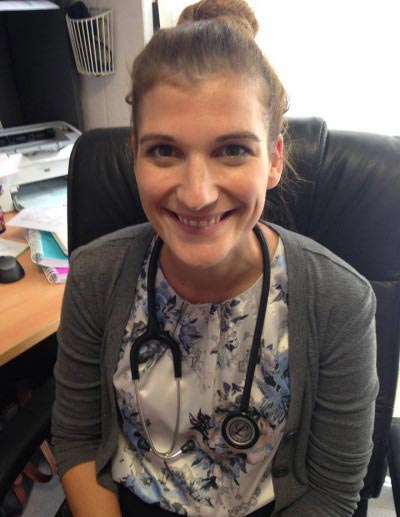 About Dr Phillis Jebron
Dr Phillis Jebron graduated from Monash University in 2009. She has been living in Mildura and working as a GP since 2014. She speaks Malay and has a special interest in women’s and children’s health, preventative care and minor surgical procedures. 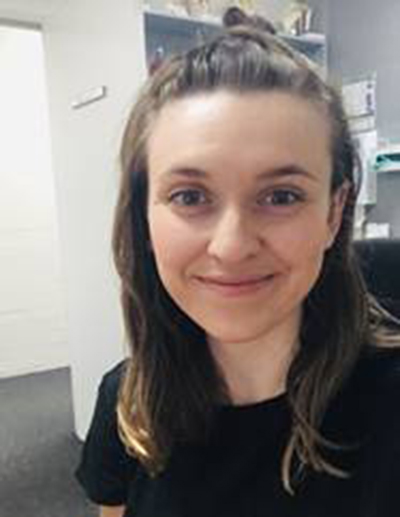 Dr Laura Nield graduated from Monash University in 2016, after training through Monash University’s School of Rural Health. She has returned to work in her home region, after completing her hospital training at Bendigo Health in Victoria and the Alice Springs Hospital in the Northern Territory. Her interests include minor surgical procedures, sexual health, LGBTIQ+ and women’s and children’s health. Outside of medicine, her hobbies include coffee, cats & running- although not necessarily in that order!!! 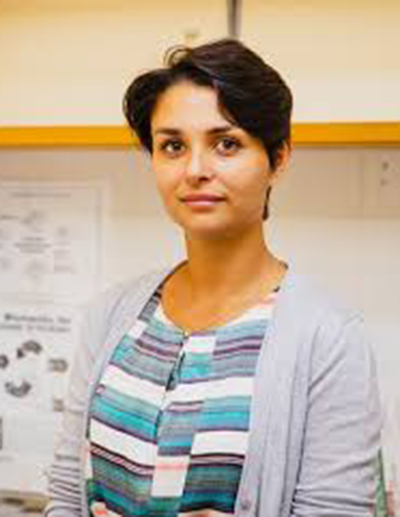 Born and raised in Mildura, Dr Nayna completed her Bachelor of Biomedicine at The University of Melbourne in 2010 and her Bachelor of Medicine/Bachelor of Surgery at Deakin University in 2016. For the past four years she has been working at Mildura Base Public Hospital and in the community. 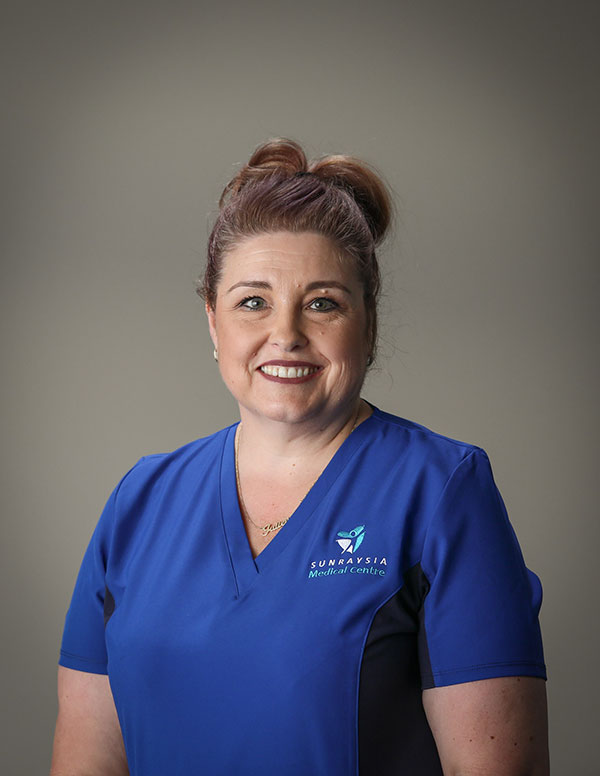 Graduated when I was eighteen and have continued nursing ever since.

My career started at the old Mildura Base Hospital, for a period 10 years.

I then moved to the Mildura Private Hospital for a further 10 years, I then had an opportunity to change paths and move into Practice Nursing 11 years ago.

Born and raised in Mildura, married a local guy 29yrs ago and have 2 beautiful boys. 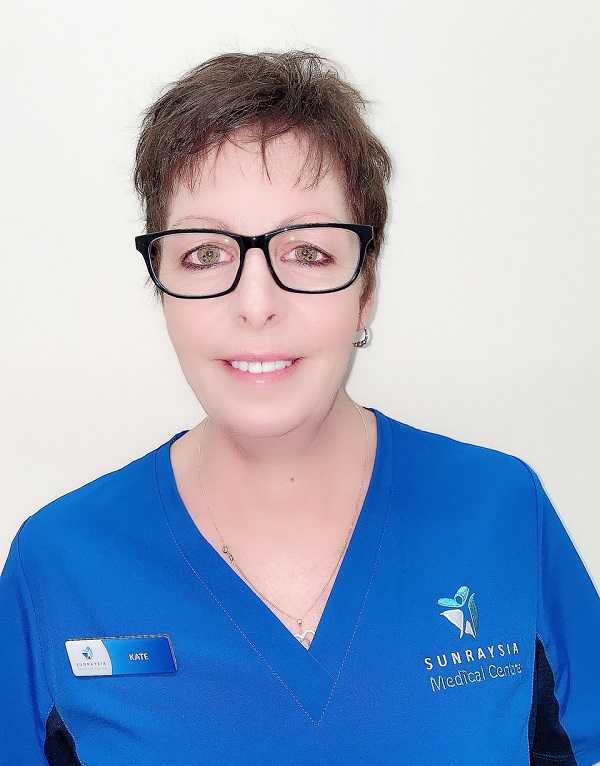 Kate has worked within the health care industry in various roles for 25 years.

She has moved and lived in several towns in Victoria, relocating to Mildura with her partner in 2014 where they have built their forever home.

Outside office hours Kate enjoys spending time with family, testing out new recipes and when possible spending time out the river with partner fishing/camping. 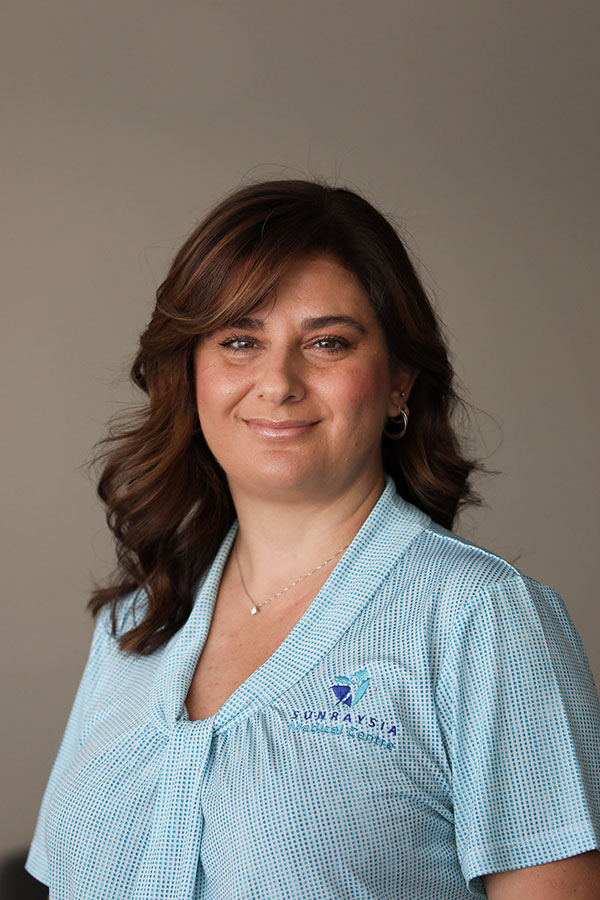 Ece is a civil engineer, and worked as a project manager in the construction industry for more than 20 years.

Ece decided to do a sea change in 2018 and use her management skills in a different area to work at Sunraysia Medical Centre as practice manager.

She is married to Dr Mehdi for 15 years and has 2 sons. She speaks Turkish and Persian fluently.

She loves country living and proud to call Mildura “Home”. 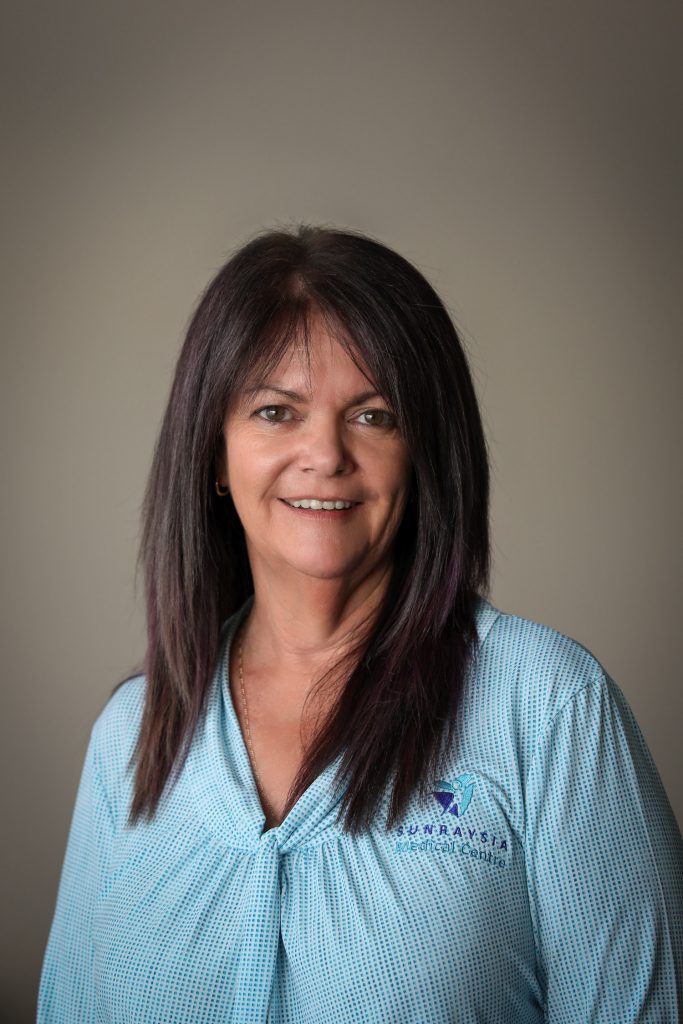 Sandy has been employed within the Medical Administration profession for the last 25 years and her commitment to patient well-being and care has always been paramount. She has met many interesting and wonderful people over the years and looks forward to meeting many more. Born and raised in Mildura, she is the proud mother of 2 wonderful and amazing sons. Sandy also enjoys reading, gardening and spending time with loved ones and friends. 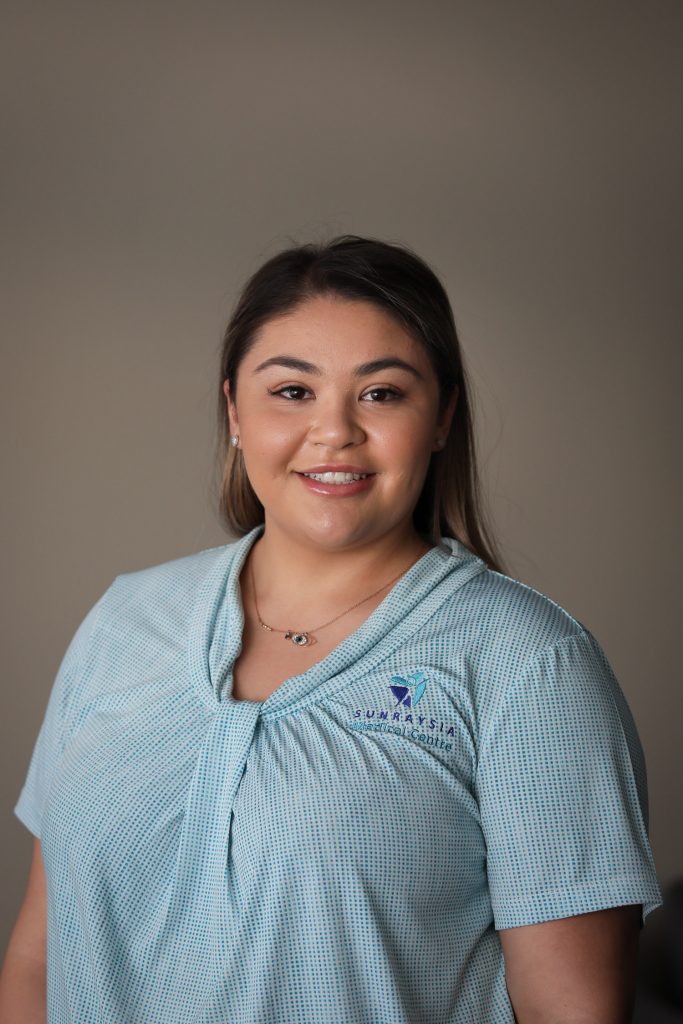 Alev has 7 years of experience in Medical Administration and completed her Certificate 3 in Business Administration in 2011. During 2018 Alev worked with the Council on the Humanitarian Settlement Program which was a rewarding and enriching experience. Alev also grew up in Mildura, and graduated VCE at Mildura Senior College in 2010. She speaks fluent Turkish and loves to travel and do yoga in her spare time. 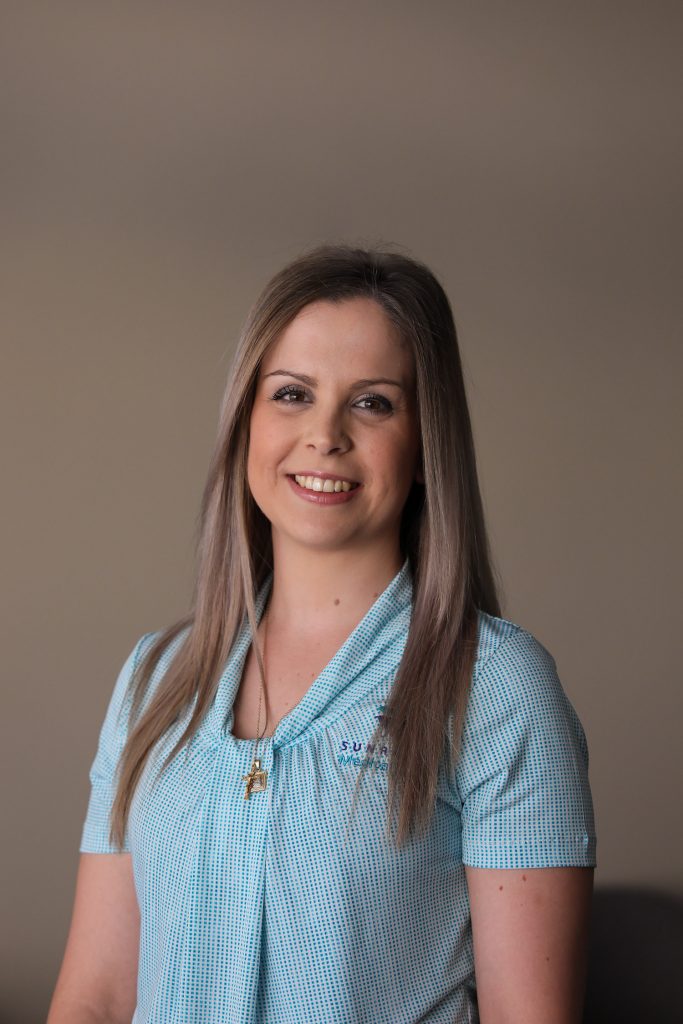 Elysia is 29-year-old who has been in the medical field as receptionist for 5 years. Elysia was born and raised in Mildura, has 3 children and been married for 8 years. She is of Greek Heritage and fluent in Greek. She attended Trinity Lutheran College from prep – year 10 and graduated VCE at Mildura Senior College in 2007. Elysia also has diploma of Children Services. Elysia creates personalised invitations for family friends. In her spare time, she loves to bake and spend time with her family. 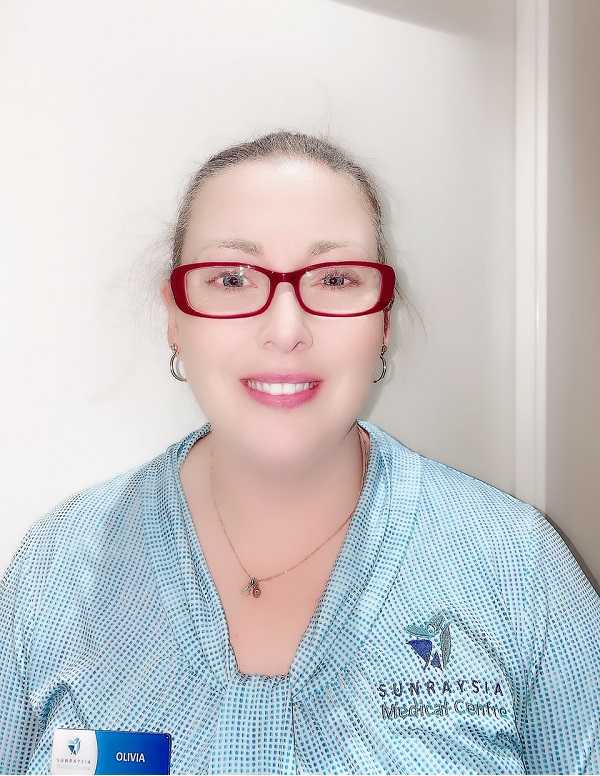 Olivia started her career as a Dental Nurse and has 10 years’ experience in this field, 1 year of that with an orthodontist. She left the work force to care for her 4 children. Moving from the Hunter Valley NSW to Red Cliffs 11 years ago to be closer to her family. Then returning 7 years ago to the medical field as a Medical Receptionist, being promoted to Senior Receptionist and Doctors’ Liaison. Outside of the office she enjoys spending time with her family and friends, watching her children in their sporting endeavors, making the most of our weather here in summer spending days boating and swimming on the river.

What you'll love about us

Pathology collection centre onsite
Our onsite pathology can help you with any required samples or testing after your appointment.

Easy access
The practice is located within Red Cliffs town centre and mall with plenty of car parks available.

Telehealth for remote patients
We provide telehealth for our patients to access all specialised services from our clinic.

Online Bookings
Online booking makes it easier for you to make an appointment.
Book Now

Ready to make an appointment?

If you’d like to know more or you’re ready to make an appointment, just call our excellent reception staff on 5062 4050 or use our handy online booking system.

If you are experiencing a medical emergency, please phone 000.

We are located in the centre of Red Cliffs at 49 Indi Avenue, Red Cliffs. Contact us to make an appointment or ask a question.